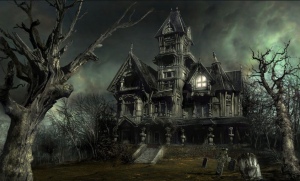 1. Skeletons
On the first place, with cherries on top, is definitely Skeletons. And then mostly skulls. I just really don’t like them. They make me feel uncomfortable. I remember being in a museum and the only way through the next hall, was through a hall of glass coffins. Just, NO. I don’t like it, I don’t like it whether it’s a queen from some important tribe, a survivor of the ice age, or some pope from an unknown century… I don’t like them. It’s weird though, because I’ve watched Vampire Diaries and The Originals and loads of these things, and they always have skulls and skeletons, but I don’t know… I just don’t like death in front of me I guess.

2. Undefinable sounds
I think everyone knows what I’m talking about: you just found that comfortable position in bed, turned out the lights and you’re all settled for the night. THEN, suddenly.. an undefinable sounds goes like a shock through your spines. No, it wasn’t the washing machine, can’t be the curtains because the window is closed. Was it closed? The microwave, maybe the button was stuck? A neighbour? Ghost. Brains should be stopped the moment you turn off the lights, seriously.

3. Lost
No, not the TV-series, even though they were pretty mad as well. I mean literally getting lost. Probably not many of you are familiar with this experience anymore since we all have phones and Google-maps. Well, I still can get lost. Last week, I took ONE wrong path and I ended up at the other side of the city. Of course, my phone battery was totally empty and I had no clue how or what. I couldn’t call my friend that I would be late, I had no clue where to go and then I start to panic. Oops! Luckily a bus station had a map, so I could find the place where to go (that was a very long walk).

4. Creepy small animals
No, spiders don’t really scare me (except those giant big hairy black ones, or shiny black ones), but I really don’t like those tiny crawling insects with their gazillion legs, worms and those other crawling things. Just EW. It’s gross, I don’t want them anywhere near me.

5. Ghost-stories
I really dislike stories and movies about ghosts. I don’t know, they just creep me out! Never seen a ghost or some sort of thing, but I think I believe there is more in this world and that unknown thing is just scary. Also those stories with declarable stuff (footsteps in the carpet, the feeling of a hand an no-one there, …), you know what I’m talking about. Just a big NO. Also ghost-pictures. Keep them away from me.

6. Ghost-movies
Makes me go straight to Ghost-movies.. I HATE THAT. Movies like Paranormal Activity cause me sleepless nights for at least two months (no joke, I slept with the light on for two full months because…). Nope, I hate them and I will never like them.

7. Fake-real vampires
So I was watching some program, a mix between Oprah and Dr. Phil, and there were two people that devoted their lives to being a vampire. They actually sucked each other’s blood. It made me so sick, oh my gosh. Can people just be normal? Or well.. you don’t have to be normal but bit less abnormal would be reaaaally nice.

8. Free Fall towers
I’m not afraid of heights, but Free Fall Towers scare me to hell. It’s just toooo high and you’re going down in such an insane speed. Can’t be good. I do like Rollercoasters, but that needed some time as well. I’ve tried some, bit by bit, everytime another one with some friends who had to PUSH me to do it.

9. Haunted houses
Also a big nope. I don’t like unexpected things I guess, but the idea of being in a dark, crappy house, knowing that every single moment, some smirked clown / zombie / man with rattle saw, or something like that, can scare you to death. Nope. You’re not getting me inside of some Haunted House.

10. Haunted walks in the forest
You know these walks during school introductions? Where you get dropped inside some forest? And around every corner there could be some scary figure that wills care you to death. Familiar? Yep.. sadly yes. I really don’t like it, obviously. But I don’t know many people who do like them. And still so many people organize them. Nope.. not for me!

As you can see.. I’m not really into a good scare anymore. As a kid, I didn’t really like it, but it feels like “the older your get, the worse it gets”. What about you? What scares you and which of the above listed things do you actually just love?